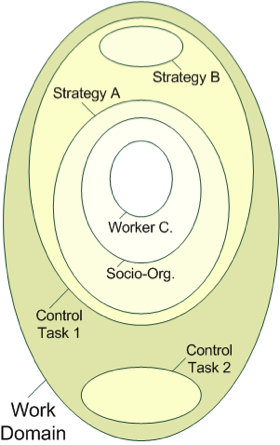 Nested layers of constraint in CWA. Adapted from Vicente (1999)

Cognitive Work Analysis (CWA) is a formative, constraint-based framework for analyzing complex sociotechnical systems. The CEL has adopted Rasmussen’s (1986) framework for CWA, and continues to contribute to its development (Vicente 1999).

CWA is fundamentally different from conventional task-based analysis methods. Instead of describing what workers should do (normative) or what they presently do (descriptive), CWA isformative, describing what workers could do to achieve work purposes. Unlike normative approaches, CWA recognizes the essential adaptive role that humans play in safely controlling the unanticipated in complex sociotechnical systems. Unlike descriptive approaches, CWA aids in distinguishing between workers’ essential goal-directed actions and ‘workaround’ activities required to cope with existing work support systems.

To systematically explore work possibilities, CWA focuses on identifying the constraints that shape workers’ purposeful goal-directed behavior rather than cataloguing specific worker tasks and procedures. This approach is inspired by ecological psychology’s tenet that complex human behavior in operational settings can be usefully explained by analyzing the complexity of their surroundings.

Physical or intentional constraints determine what can be purposefully accomplished with the sociotechnical system. Workers cannot perform operations that violate laws of nature or exceed the capabilities of the process and equipment. Often, intentional constraints such as military rules of engagement provide equally strong guidance to workers’ behavior.

Within the limits of the work domain, execution of generic control tasks is constrained by their order of operations, and the system states in which they are necessary or effective.

The same control task can typically be performed in many ways using different cognitive strategies. Experts shift between strategies in response to changing demands, for example on time, information accessibility, and cognitive resources.

Depending on the appropriate cognitive strategies, control tasks can be assigned to either workers or automation, or teams of workers and automation. An organization’s social structure determines how information and decision-making capabilities relating to the work environment are distributed.

The above constraints determine the physical, perceptual, and cognitive demands placed on humans in the system. Workers must be capable of meeting these demands through skill, rule, or knowledge based behavior. Analysis of worker competencies can guide system design, training programs, or development of support tools (see EID).

The origins of the CWA framework lie in research conducted from 1968 to the 1980s at the Risø National Laboratory in Denmark. Empirical studies and conceptual developments were documented in a series of internal publications analyzing mental strategies (Rasmussen and Jensen 1973), control tasks (Rasmussen 1974), work domains (Rasmussen 1979), and worker competencies (Rasmussen 1980). These concepts were further developed into a coherent, systematic framework (Rasmussen 1986; Rasmussen, Pejtersen et al. 1994; Vicente 1999).

Applications of CWA are diverse. The Australian Department of Defense, for example, has applied CWA to a wide range of projects including specifying, designing and using training systems; evaluating alternative equipment design proposals; and developing team designs (Naikar 2006). CWA has been used extensively by CEL to design interfaces, experiments, and training, to analyze data, and to categorize performance measures and knowledge elicitation techniques (Vicente 1995). It has proven to be an invaluable research and design tool.